The story of Prince of Wales College (PWC) dates back to 1804, when Edmund Fanning, the Island’s second Lieutenant-Governor, granted two blocks of his own land to the Crown, as a site “for the purpose of laying the foundation of a College for the education of youth in the learned languages, the arts and sciences, and all the branches of useful and polite literature.” In 1821, a district school called the National School (also known as Kent School and Breading's School) opened. Located on the Kent Street side of the block, the National School operated until the mid-1800s, and closed just before the Normal School was established in 1856. The Normal School, for training teachers, was located in the National School building, which had been renovated and enlarged for that purpose.

Central Academy was built in 1834-35, south of the National School. It was upgraded in 1860, and was renamed Prince of Wales College, in honour of that year's visit of the Prince of Wales, who later became King Edward VII. The College was intended “to impart an Education equal to that to be acquired in any other institution in the provinces,” in order that “the youth of this Island may be sent into the world with a certificate of an educational qualification enabling them to take their place in the various professions and vocations of life with advantage to society and honor and credit to themselves.”

In 1879, the College became coeducational, and the Normal School (a separate institution founded in 1856) became part of PWC. 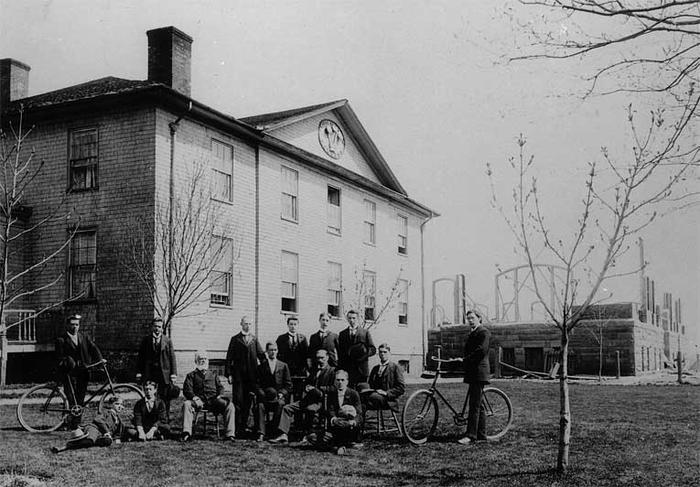 The first College building, built of wood in the same style as the Provincial Building, was replaced in 1900 by a stone structure. This burned in 1932, and was replaced by the building that stands to this day as part of Holland College.

That year, through an Act of Provincial Legislation, the province moved to create “a single, public, non-denominational institution of higher education,” and, in April 1969, the University of Prince Edward Island was incorporated, a worthy heir to St. Dunstan’s University and Prince of Wales College. 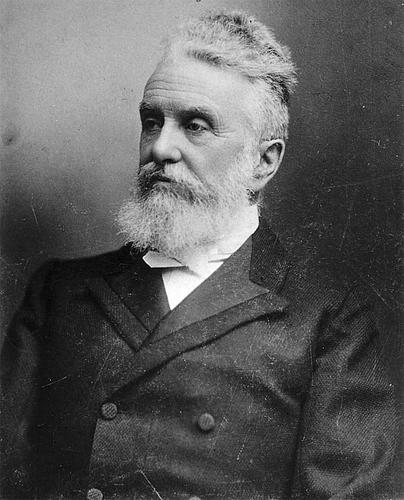 Most influential among the people who taught at PWC  was Dr. Alexander Anderson (1836–1925). Born in Aberdeen, Scotland, Alexander Anderson immigrated to Prince Edward Island in 1862 to take the position of second professor at Prince of Wales College. There, among other duties Anderson trained students studying for their Teacher’s Licence. Former students Lucy Maud Montgomery, Sir Andrew Macphail, and Jacob Gould Schurman (among many others) had lavish praise for Dr. Anderson. "I have sat under many instructors," Schurman once said, "speaking in different languages — German, English, French, Italian —  but I have never yet met such a great teacher as Prof. Anderson; and calmly reflecting on the matter I believe there is none to whom all considered, I personally owe so much as to him."

Marian Bruce, in her forthcoming history of Prince of Wales College, to be published in the spring of 2005, describes him this way:

Alexander Anderson was a short, powerfully built man, with a beard, a thick shock of grizzled hair that stood straight up, and dark eyes that suggested he might have a sense of humour. Strolling through the halls of Prince of Wales College, he presented a picture of dignity bordering on pomposity. Always impeccably dressed in his cutaway coat and tails, he carried himself ramrod straight — so straight, he almost leaned over backwards. He was capable of savage sarcasm, but in the two years that Sir Andrew Macphail of Orwell attended Prince of Wales College in the early 1880s, Anderson never once so much as uttered a rebuke to any of his students. “A breach of discipline,” Macphail wrote later, “was looked upon by himself and his pupils as an offence against his own dignity and therefore against the eternal order of the universe.” The secret to his success in disciplinary matters, perhaps, was that he treated boys just off the farm with great respect, as if they were young gentlemen who would become great scholars. And some of them did.  The secret to his academic success was that Anderson loved to teach. “He has a wonderful tact in finding out and developing talent in his pupils,” a 19th-century biographer wrote, “and many a young man has been started by him in a career of usefulness and distinction, who might otherwise have remained unknown.”

In the first decade of Anderson’s  33-year reign as principal, Prince of Wales College began developing the reputation for academic excellence that it retained to the end of its days.  Prince of Wales then offered high school and the first year of university, and graduates who transferred to universities on the mainland, the United States, or Great Britain did remarkably well, many of them winning scholarships and prizes. Many went on to become doctors, lawyers, university professors, community leaders. Ironically, that didn’t mean that the College was safe from either criticism or the threat of abolition. In fact, that sword hung over its head at least until the 1880s. As if that were not enough, Anderson had to deal with a dizzying turnover of staff and a building that became more and more inadequate as the years went by.  Fortunately for the College, Anderson hung on, through thick and thin. He had his compensations: a salary, in the early 1870s, of $1,298 a year; the satisfaction of seeing the college grow; praise from mainland universities; and the everlasting gratitude of some of the super-achievers who had passed through the doors of his school.

One of them was Jacob Gould Schurman, who became president of Cornell University in Ithaca, New York, and later American envoy to China and ambassador to Germany.  He once described Anderson as the greatest benefactor the Island ever had. “I have sat under many instructors,” Schurman said, “speaking in different languages — German, English, French, Italian — but I have never yet met such a great teacher as Prof. Anderson; and calmly reflecting on the matter I believe there is none to whom all considered, I personally owe so much as to him.”

PWC went on to have several memorable principals, including Dr. Samuel Napier Robertson (1869–1937) after whom UPEI’s Robertson Library was named; and Dr. Frank MacKinnon (1919– ), who took PWC from a junior college to a degree-granting institution. In 2002, UPEI, in co-operation with the Confederation Centre, established the annual Dr. Frank MacKinnon Lecture Series to recognize his leadership in higher education and the arts on PEI.

[Material taken from Annual Report of the Department of Education of the Province of Prince Edward Island for the fiscal year ending March 31st, 1964, and the forthcoming history of Prince of Wales College by Marian Bruce, to be published in spring 2005 by Island Studies Press.]