The Buildings of PWC 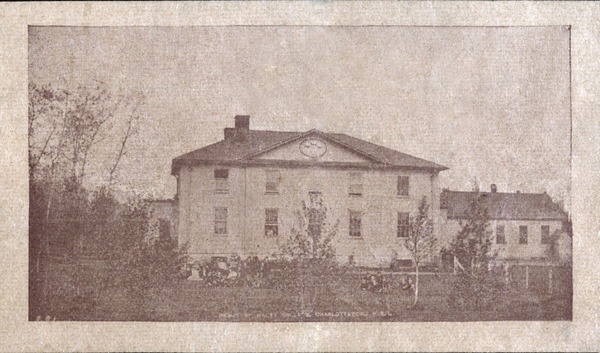 From its humble beginnings in the dilapidated, soot-stained building that initially housed the College to the "huge, modern and well-equipped" building1 which still stands today, PWC underwent many physical transformations during the one hundred and nine years of its existence. When it first opened in 1860, the school was housed in a forty year- old building in the city block bounded by Weymouth, Grafton, Cumberland, and Kent streets. Formely home to the Central Academy,  PWC's academic predecessor, 2 this building, though woefully inadequate in size, quality, and safety, had to serve PWC for nearly four decades more, for want of government funding for a suitable replacment. It was not until 1900 that principal Alexander Anderson oversaw the construction of a brand new Prince of Wales College.3 Praised as “a commodious and very substantial structure”4 by Lieutenant Governor Dr. Peter McIntyre, the school, which featured two new chemistry labs, an assembly hall, room for the Model School (the practice teaching facility for Normal School students) and classrooms.5 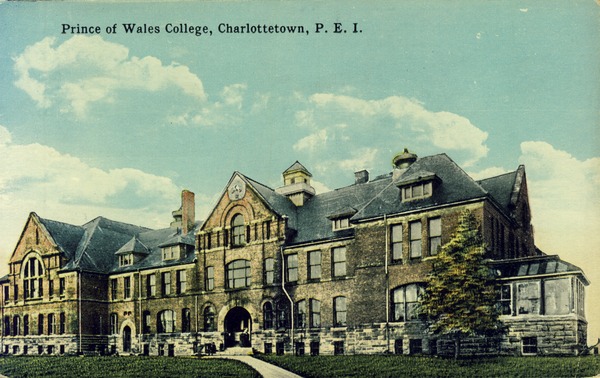 The $36 000 needed to complete the project seems to have been a good investment, as the new building served students and faculty well for the next several decades. One reporter in the student newspaper wrote that affection for the building ran "deep in our hearts, we were devoted to the old place and will cherish precious thoughts of it for the rest of our lives."6 The editorial that contains this praise was written shortly after the tragic fire of 1932. Thought to have been started by either faulty wiring or a furnace explosion,7 the blaze destroyed the entire campus, including the book collection of the then principal, Samuel Robertson, who had to be firmly dissuaded from rushing into the blaze to retrieve them.8 But as devastating as the fire certainly was, the student body and administration saw the destruction of the old campus as an opportunity to create an even better learning environment.9 By1933, classes were backin session in a brand-new edifice of brick and stone that would house the College for the rest of itsyears.10

Funded by the province with great help from the Carnegie Corporation, a foundation from New York City which helped 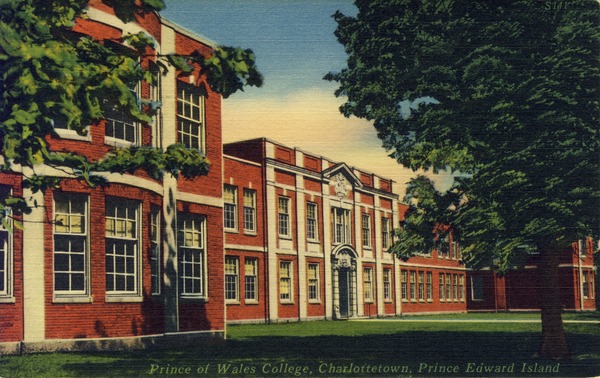 build libraries all over the world,11 the new building “satisfied all expectations,” according to Robertson.12 It was also the Carnegie Corporation that provided funding for the construction of a library space in the new building: $135 000 was donated for the library itself and a yearly grant of $1500 followed to provide for the purchase of new and updated library books.13 In the decades after it was built, the building underwent several small expansions and renovations, but it was not until 1961 that the College took on its next big construction project.

In that year, a women's residence -- named Montgomery Hall, in honour of the College's most famous almunus -- was built on the corner of Kent and Cumberland Streets, just across from the main campus. Before its opening, students lived in boarding houses throughout Charlottetown or with relatives, but boarding rates were expensive and the dispersal of students across the city interfered with the feeling of unity within the student body.14 The construction of the Hall (affectionately referred to as Lucy’s Place or Monty Hall) finally gave students a communal place to gather and socialize 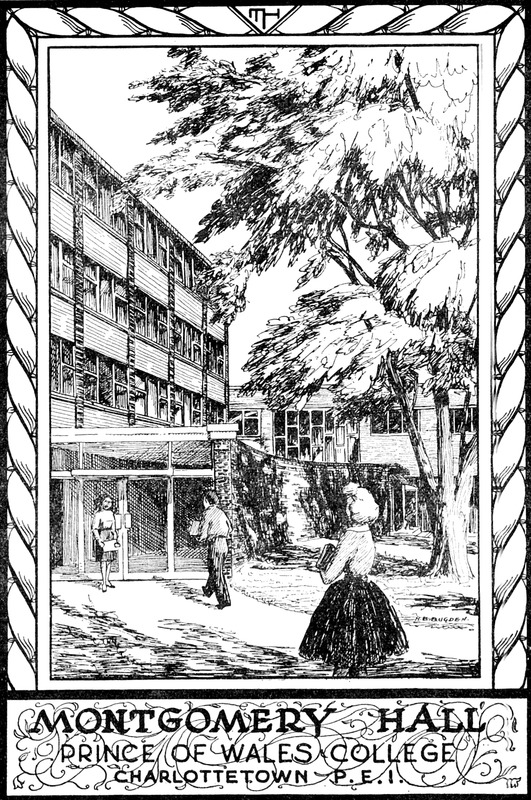 on campus. It was equipped with a library, cafeteria, sick room, laundry facilities, accommodations for 104 girls, and a student centre that residents and non-residents could use as a common space.15 The students took to their new residence like fish to water, declaring it to have “become an essential part of our college life at Prince of Wales.”16Even those of the male persuasion were able to take advantage of the new facility: although there were strict guidelines governing gentlemen visitors to the residence section of the building, a "News from Monty Hall" contributor in The College Times had occassion to comment on some male visitors thusly:  “a few are here so often we’re thinking of sending them a bill for room and board.”17

Plans had also been made to build a men’s residence during the 1960s,18 along with a very ambitious campus- wide expansion that would have seen, in addition to the residences, a new gymnasium, a library across the street, and a new lecture hall.19 Although the 1969 dissolution of PWC and St. Dunstan's University to make way for the new University of Prince Edward Island put an end to Prince of Wales' expansion plans, the 1933 PWC building and Montgomery Hall have served, since 1970, as the main Charlottetown campus of Holland College, Prince Edward Island’s highly-respected community college network.

The image of the original (1860-1900) Prince of Wales Building is taken from the front page of the December 1899 issue of The College Times. The issue belongs to the UPEI Archives and can be found in the PWC digital collection under “College Times.”

The image of a line drawing of Montgomery Hall is taken from the opening pages of the 1963-1964 Prince of Wales College and Provincial Normal School Calendar.

The Calendar belongs to the UPEI Archives and can be found in the PWC Digital Collection under 'PWC Calendars.”